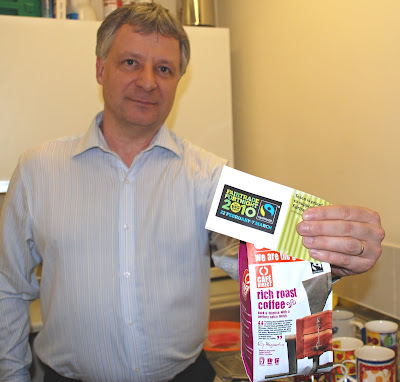 David Williams, the Labour Party’s Parliamentary Candidate for Crewe and Nantwich, has welcomed and supports ‘Fairtrade Fortnight 2010’ and urges residents and organisations in Crewe and Nantwich to get involved.

‘Fairtrade Fortnight 2010’ runs from Monday 22nd February until Sunday 7th March, and aims to increase the awareness and purchasing of Fairtrade products. This year the theme is ‘The Big Swap’ which encourages people to swap more products to Fairtrade. The target is one million and one swaps by the end of the Fortnight.

David said, “I am encouraging shoppers in Crewe and Nantwich to buy Fairtrade products during this fortnight, but not to stop there. Over 4,500 products have been licensed to carry the Fairtrade Mark and there are over 460 producer organisations selling to the UK, representing more than 1.5 million farmers and workers in developing countries. Small changes in our shopping habits can make a big difference to the world’s poorest people. By buying food, gifts and other products from developing countries, we can make a real difference to the lives of some of the world’s poorest people.”

Douglas Alexander, Labour’s International Development Secretary, said, “David Williams has been a passionate campaigner on fair trade. I hope shoppers across Crewe and Nantwich will join David during Fairtrade Fortnight and take the chance to swap their usual shopping for Fairtrade products.”

The Government has supported Fairtrade since 1997 with funding from the Department for International Development (DFID), but this year Labour is significantly boosting support for Fairtrade by quadrupling funding to £12m over the next four years (2010-2013) through the global body FLO. Farmers in developing countries will also see double the amount invested directly back through their local organisations for community projects such as irrigation and clinics through ‘Fairtrade Premiums’.

David commented, “When consumers and retailers act together to promote and buy goods from developing countries, we can make a real difference to peoples’ lives. I am supporting those people by buying Fairtrade products and I would urge residents of Crewe and Nantwich to join me in three simple steps. First, where possible swap your shopping for a Fairtrade labelled product. Second, if there is no Fairtrade labelled alternative, ask the retailer to offer Fairtrade products in future. Third, ask for clear labelling about where products have come from and about the working conditions of those who produced the goods. By ‘shopping for development’ we can held provide a vital route out of poverty for many, and by following these three simple steps we can have an immediate effect.”
Posted by David Williams at 07:24