A FAIRER DEAL ON CREDIT AND STORE CARDS

David Williams, Labour’s Parliamentary Candidate for Crewe and Nantwich, welcomed the announcement from the Government this week to introduce measures to ensure that people get a fairer deal from Credit Card and Store Card companies.

He said, “The Government is consulting on proposals which include banning the practice of increasing limits without prior consent; restricting the increase of interest rates on existing debt, raising the minimum monthly repayment levels so that debts are paid off more quickly and ensuing that the most expensive debt is paid off first. These measures will be help in making sure that Credit and Store Cards work in the interests of the customers rather than the companies hat run them.”

This announcement builds on a series of financial reforms that are designed to make sure that customers are better informed, financial institutions are better managed and markets are better regulated.

David added; “In the run-up to Christmas, many families in Crewe and Nantwich find themselves falling into debt. In many cases the Credit and Store Card companies encourage this rather than helping families live within their means. A debt run up at Christmas may take a long time to pay off and has a crippling effect on many families. I welcome any action that will help to relive this burden on families in Crewe and Nantwich.”
Posted by David Williams at 07:52 No comments:

Watch the video
Posted by David Williams at 17:37 No comments:

Posted by David Williams at 07:25 No comments:

The West End's Big Tidy Up 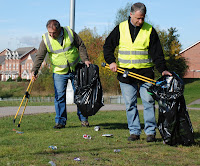 CREWE residents are being urged to take part in the West End's Big Tidy Up.

The project is supported by Labour's Parliamentary candidate for Crewe and Nantwich David Williams and Crewe West Councillor Roy Cartlidge.

The initiative forms a part of the Community Action Week programme.

Agencies across the West End of Crewe are banding together to clean up grot spots and consult with residents on the improvements they would like to see.

Cllr Cartlidge said: “The main problems at the moment are litter and fly-tipping.

"As soon as we have cleared an area of rubbish, it seems to be as bad as ever again in a matter of days.

"It is not acceptable that a small number of people use our open spaces and public areas as dumping grounds.”

David Williams added: “We all have a personal responsibility to keep our shared spaces clean and tidy.

"As well as involving residents in the Big Tidy Up, we need to see the council making a real difference.

"That is why I’m pleased to see them listening to local residents and letting them have a say in what happens in their area.”

There will be open air consultations at the open space behind Minshull New Road and Hulme Street on Tuesday October 27 from 10am until 12noon and from 4pm until 6pm.

On Friday October 30 from 11am until 2pm the consultation will be in Frank Webb Avenue play area and Frank Bott Avenue field as part of the free half-term Family Fun Day.

Mr Williams added: “These open-air consultations will allow residents to have their say on the type of improvements they would like to see such as the creation of a village green, tree planting, living sculpture trails, improvements along Leighton Brook and the like.”

Watch the video
Posted by David Williams at 07:30 No comments: 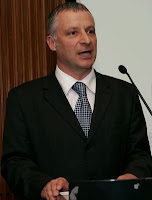 The Tory MP for Crewe & Nantwich is accused of hypocrisy by attempting to take credit for the creation of new jobs.

David Williams, the Labour Party’s Parliamentary Candidate for Crewe and Nantwich, has accused Edward Timpson of being two-faced by attending the announcement of the first 20 of 200 new jobs funded by a £1.3 million cash injection from the Labour Government.

Addressing a packed meeting of Crewe and Nantwich Labour Party, David Williams continued, “It beggars belief that a Tory MP can stand there grinning next to Labour Minister Phil Woolas, knowing his party opposes the very funding that created those jobs. Behind that smile is the knowledge that if his party were in Government that funding would not be available and those jobs would not be created. He should hang his head in shame for this disgraceful opportunism and rank hypocrisy.”

The Tories opposed Labour’s fiscal stimulus aimed at bringing the country out of recession. The ‘Future Jobs Fund’ is a big part of Labour’s action on the economy. It will create 150,000 new jobs with training for young people nationwide, with an initial 200 in Cheshire East.

David Williams said, “I welcome these new jobs. They are vital to the future prosperity of Crewe & Nantwich. Thank goodness we have a Labour Government prepared to invest in jobs to help people through the recession and bring about an economic recovery.”

David concluded, “Thank goodness the Tories are not in power as they would leave people to sink or swim in these difficult times. They would condemn another generation of young people to unemployment and few opportunities.”
Posted by David Williams at 07:50 No comments: 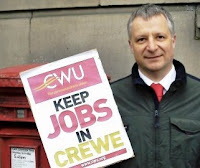 “Nobody wants a postal strike on Thursday”, said David Williams Labour’s Parliamentary Candidate for Crewe & Nantwich, “we need Royal Mail management to work with the CWU for a lasting agreement on the modernisation programme.”

David Williams continued, “This dispute is crucial to the future of the Crewe Sorting Office. Last year I gave my full support to the CWU when I spoke on the steps of the Municipal Buildings at their rally. I then called for management to negotiate with the Union on a national plan and to stop picking-off sorting centres for closure like Crewe.

“It saddens me that twelve months later I have to repeat that call. Management must be transparent on the modernisation proposals to enable an agreed way forward with the Union, it is the only hope for Crewe.

David Williams concluded, “I can assure Crewe and Nantwich postal workers that they have my full support and that of the local Labour Party. Our joint efforts saw off the threat of privatisation and we must now get an agreement on the future of Royal Mail.

“I very much welcome the backing for postal workers from some MPs who have rallied around an Early Day Motion in the House of Commons that supports an early settlement of the dispute.”

Early Day Motion 2035 reads: “That this House welcomes the proposals put forward by the Communication Workers Union seeking to find a resolution to the current postal dispute, in particular their offer to explore the possibility of third party mediation; and calls on the Government to do all in its power to ensure that Royal Mail responds positively to the union's proposal.”

Please click here for further information on EDM 2035
Posted by David Williams at 16:18 No comments:

David Williams stands up for shopworkers 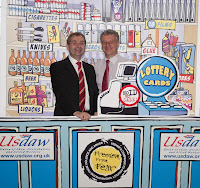 Speaking at an Usdaw campaign event in the House of Commons, David Williams continued, “Shopworkers have to make on-the-spot judgements about customer ages all the time.

“Refusing to serve can be a flashpoint for abuse, both physical and verbal, and even asking for ID can be enough to make some people kick-off.

“On the other hand, if a shopworker serves an underage customer, they are liable to an £80 fixed penalty notice, with repeated breaches resulting in a court appearance or a fine of up to £1,000.

“The balance is not right, there is too much responsibility on the shopworker and not enough on the underage person who is attempting to buy.

“I want the Government to run a high profile campaign making it clear to youngsters that it is an offence for them to attempt to purchase alcohol underage. I also want to see local retailers display that information prominently in their stores.”

John Hannett, Usdaw General Secretary added, “We have a lot of support from MPs and future MPs like David on this important issue. Many of our members find age-related sales one of the most difficult aspects of their job.

“We want awareness raised amongst young people, spreading the ‘No ID – No Sale’ message. We want retailers to support their staff by banning persistent offenders from stores. And Usdaw is campaigning with the Government to introduce a national proof of age card, to make it easier for workers to check the person’s age when needed.”

Winning the fight for Britain's future

The conference season has shown that the next election will be a big choice about the change we want for Britain. Labour offers change for the mainstream middle. The Conservatives offer change to benefit the privileged few – a change you can’t afford.

- Guarantee a job or training place to 18-24 year olds out of work for a year.

- Guarantee diagnosis within one week if your GP suspects you have cancer.

- Free personal care at home for those with high needs.

- Cut the deficit in half in four years.

- Abandon young people to the dole.

- Cut the equivalent of 3,500 police from our streets this year.
Posted by David Williams at 14:22 No comments: