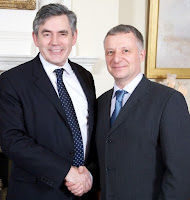 Chronicle readers came up with questions on a range of issues, including the future of Crewe town centre; job security, help for those struggling to pay their mortgage and many more. David will answer all the questions received personally, but he knew there would only be the opportunity to ask one question to the PM, so he chose the subject that came up most often - immigration.

David Williams said, "Prime Minister, people in Crewe and Nantwich often raise with me the issue of immigration. A number of Chronicle readers have asked me to raise this with you and it comes up regularly on the doorstep. They are concerned, particularly in the current economic downturn, that the Labour Government has a firm but fair immigration system?"

The Rt Hon Gordon Brown MP responded, "I understand the concerns and that is why, last week, we introduced a Bill in Parliament to deal with many of the issues that worry people.

"Labour is taking action to strengthen our borders and to shut down the causes of illegal immigration. We are holding newcomers to account when they break the rules, and deporting rule breakers where necessary.

"Immigration contributed some £6 billion to our economy in 2006. We have announced that we will be using a new Points Based System to require employers to offer British jobs through Job Centre plus before recruiting foreign workers.

"We are delivering a compassionate system, that makes and enforces decisions quickly when we have asylum obligations to honour. The number of asylum seekers coming to Britain is the lowest since 1992, and our systems for processing asylum applications are quicker and clearer. We remove someone from Britain every 8.5 minutes and last year we deported 4,200 foreign national prisoners.

"Migration only works if it brings benefits and these measures will ensure that only those migrants that make a positive impact on their local community will be able to stay in the UK."
Posted by David Williams at 21:20