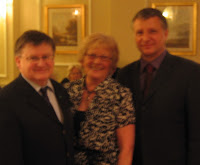 "I was delighted to welcome Ian, particularly with this week being the 10th anniversary of the introduction of the National Minimum Wage. Ian was the Minister who took the Act through the House of Commons in the face of very intense Tory opposition. They did not want British workers to have basic pay protection and did everything they could frustrate Labour delivering our manifesto promise.

"I firmly believe that the minimum wage will be a lasting legacy of the Blair Government, in the same way that health and safety legislation introduced by Wilson's Government transformed British workplaces."

"We are living in unprecedented global economic circumstances and we have to ensure that working people are supported. They must not be left to sink or swim as the Tories did in the 1980s and 90s.

"No other world leader has ever made the efforts made by Gordon Brown to achieve global agreement on the economy, to defend working people and families, to invest in welfare and the creation of new employment.

"The Conservatives cannot be trusted and will take advantage of the global economic crisis to drive down wages. They will defend privilege, take no international action and cut public services. The Tories will cap increases in the National Minimum Wage and introduce exemptions that will make it meaningless.

"Only Labour is looking out for working people."