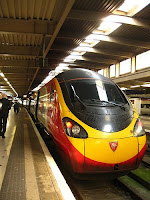 Channel 4 News reported recently that Steve Hilton, one of David Cameron’s top advisers, was arrested over a train ticket dispute. Conservative Central Office confirmed that the Tory Leader’s Director of Strategy was fined £80 for disorder in October 2008. It is understood that Hilton was dashing to get the train back to London at the end of the party’s conference in Birmingham. He was asked to show his ticket, failed to produce it quickly and then got into a dispute with train staff. The police were called and he started to swear at the railway staff, He was promptly arrested and taken to a police station at Birmingham New Street. Once he had calmed down, he was issued with a penalty notice for disorder under Section 5 of the Public Disorder Act.

David Williams said, “I have a long history of campaigning for action to tackle violence, threats and abuse against workers. I am currently working with the Rail Unions for an additional penalty against those who assault workers in the course of their duties. Whilst on this occasion there was no physical violence, verbal abuse is extremely hurtful and distressing.”

David added, “I have spoken to workers who tell me that insults and swearing are all too common and that they dread the next customer who is going to give them a mouthful. I firmly believe that no worker should regard abuse as being part of the job. I call on all passengers to remember that rail workers are real people, doing the job they are paid to do and that they deserve our respect.”
Posted by David Williams at 07:21