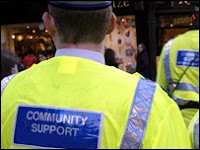 I was out talking to constituents in Wistaston Green and Queens Park today. Lots of issues were raised on the doorstep, but crime is a recurrent theme. I am particularly concerned that people are being misled by the Tories, so I thought I would tell it like it really is.

Labour's commitment to fighting crime – and the progress we are making – is in stark contrast with the Conservatives, who have no credibility on law and order.

They have continually tried to block Labour's investment in law and order and the tough measures we have taken against crime, including voting against tougher sentences for serious, violent and persistent offenders, and they repeatedly dismiss our anti-social behaviour measures as gimmicks. The Tories talk tough but vote soft.

Britain is safer with Labour. Crime is down 32 per cent since 1997 - the chance of being a victim of crime is at its lowest for 27 years - and we have provided over 14,000 more police and 16,000 Police Community Support Officers, giving every community in England and Wales its own Neighbourhood Police Team.

And we will go further: our ambition is to reduce violent crime, theft and burglary so that the average chance of being a victim of crime will be the lowest in nearly 30 years. We will provide 7,000 more prison places by 2010 through the largest ever prison-building programme.

The Tories will cut the Home Office budget, which will mean fewer police officers on the beat.
Posted by David Williams at 16:39