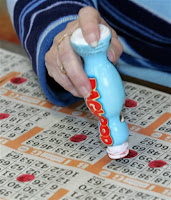 David Williams, Labour’s Parliamentary Candidate for Crewe and Nantwich has been contacted by a number of local bingo players who are concerned about the effects of this year’s Budget on bingo clubs.

David Williams said, “After hearing the concerns of Crewe and Nantwich bingo players I raised the issue directly with HM Treasury and received the following response”.

The response from HM Treasury said: “You are right that a number of changes to the way bingo is taxed were made in the Budget. These changes were made to help simplify the way in which bingo clubs are taxed, something that people have asked for.

“The changes you mentioned in your letter should be seen alongside the removal altogether of VAT on bingo player fees. The changes mean that overall tax on bingo is 22% - down from an estimated 24-25% rate before the Budget. This has been brought down from the much higher rate of 35%, in force in 2003.

“The tax rate in bingo is comparable to the average tax rates on gaming machines, casinos and the National Lottery, all of which are taxed within a 20-25% range.

David Williams concluded, “I am very aware of the importance that bingo has in people’s lives and communities. I will continue to listen to bingo players and their clubs, and I will make sure their concerns are raised with the Government.”
Posted by David Williams at 07:03