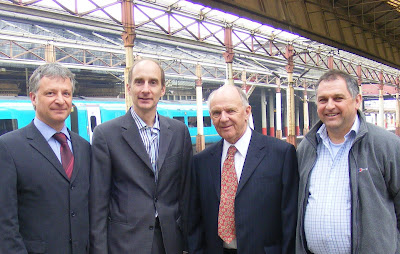 David Williams, Labour’s Parliamentary Candidate for Crewe and Nantwich, has welcomed the announcement by Transport Secretary Lord Andrew Adonis today of the launch of a £50m fund for improvements in ten key railway stations in England following the report of the ‘Stations Champions’ on the state of facilities for passengers across the country.

The announcement comes in support of the call by the ‘Champions’ for a comprehensive list of minimum standards for all stations aimed at improving the daily travelling experience of passengers and attracting more passengers on to the railway.

David Williams said, “This additional Government investment in Crewe Station is very welcome. It is further confirmation that we need to upgrade the station in it’s current location and reject the ridiculous idea of moving it to Basford. I thought we had laid that idea to bed when I brought the then Secretary of State Geoff Hoon to Crewe and he confirmed that there was no funding to move the station.”

Transport Secretary Lord Andrew Adonis, together with ‘Stations Champions’ Chris Green and Professor Sir Peter Hall, is today embarking on a whistle-stop tour of the ten stations that will benefit from new £50m fund, supplemented by commercial and third-party contributions by Train Operating Companies.

David said, “I met with Lord Adonis at Crewe Station recently, and, along with Labour Councillors, we made the case for the ‘Crewe Gateway Scheme’. Soon after that the Rail minister Sadiq Khan confirmed that the Government would welcome a proposal from Cheshire East Council. I was shocked therefore to learn that the Council has not sent that business case to the Department for Transport. What is even more shocking is that the Council has since employed consultants to come up with a vision for Crewe and they have produced a document that refers to the possibility of relocating the station again. I would like to know how many thousands of pounds the Tory-controlled council is spending in undermining the ‘Crewe Gateway Scheme’.”

Former leading Cheshire Country Councillor David Newton added, “I do not understand why Cheshire East is delaying on this. I, and the late County Councillor Alan Richardson, worked on a Panel to put together the ‘Crewe Gateway Scheme’. The plan is in place and it should have been sent to the Rail minister as soon as he asked for it. What’s the delay? Where has the money for the scheme gone?