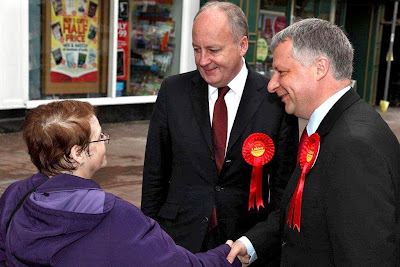 David and Shaun spent several hours on the square at Nantwich meeting and speaking with shoppers.

David said, “Lots of shoppers were keen to stop and have a chat. Most wanted to talk about the things that matter to them – the bus passes for the elderly, tax credits, winter fuel allowances, the minimum wage and the Health Guarantees were mentioned time and time again. The economy of course underpins all of these.”

The Secretary of State said, “I am really pleased that I have been able to come to Nantwich to support David Williams today. Crewe and Nantwich is a very important seat and I believe that David will be the ideal person to represent Crewe and Nantwich as their MP. He is a local person, who is extremely capable and experienced. I know that he is getting lots of support but it is important that people turn out on 6th May and use their vote ... and use their vote for David Williams.”

The Labour Party balloons and carrier bags were popular again and lots of people wanted to take time out to speak to David.
Posted by David Williams at 17:18