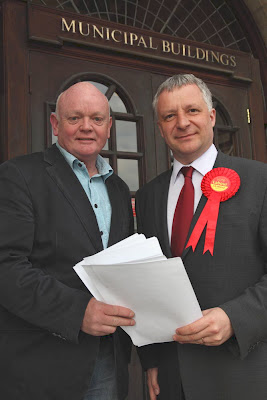 David Williams, Labour's Parliamentary Candidate for Crewe and Nantwich, has deposited his nomination papers for the General Election to be held on 6th May.

David commented, “I am proud to be the Labour candidate for Crewe and Nantwich. Now that my nomination papers have been submitted, it marks the start of a very important election campaign”

David’s nomination has been supported by many well-known local people including:

Jules Hornbrook – local author and creator of the Crewe Blog.

Dorothy Flude – Mayor of Crewe and Leader of the Labour Group on Cheshire East Council.

Peter Kent – former Mayor of Crewe & Nantwich and Leader of the Borough Council for 16 years.

David Williams said, “This election is probably the most important for over sixty years. Several people have said to me that they voted Conservative at the by-election as a protest against the government but in the knowledge that it would not change the government. That is no longer the case. This election is all about who will form the government and the road that the country will travel over the next five years. Labour has already shown that their policies are bringing the country out of the world-recession and it is vitally important to us all that we secure that recovery and not make the same mistakes of the past. We need investment now to ensure that people have jobs and to protect the NHS, Education and the Police. In the recession of the 1980s the Tories said that high unemployment was ‘a price worth paying’. Labour does not accept that.
Posted by David Williams at 18:40