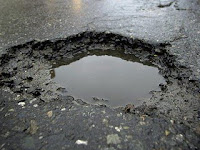 David Williams, Labour's Parliamentary Candidate for Crewe and Nantwich, has welcomed the boost from the Labour Government to tackle the pothole problem in Cheshire East.

The Labour Government has injected an extra £900,000 into Cheshire East to repair the potholes caused by the recent severe weather.

David said, “It seems that everywhere you go in Crewe and Nantwich there are big potholes in the road, and they are getting bigger every day. Cheshire East Council has boasted that they have done a good job in repairing the roads, but it does not seem that way around here. This extra cash from the Government – just under an extra million pounds – is very welcome and I hope that Cheshire East will be using it to tackle the pothole problem in Crewe and Nantwich where it is needed most.”

He added, “I am receiving complaints from residents on a daily basis. It has never been as bad as this before. Some repairs have been done, but filling the holes with a shovelful of tarmac is no answer. As soon as a few cars have run over it, the tarmac is gone and the pothole is bigger than before. We need a proper repair job doing. The Government money is very welcome but it is now up to Cheshire East Council to use it wisely.”
Posted by David Williams at 07:29