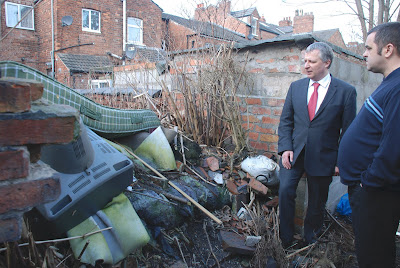 David commented, “In walking around areas of Crewe, meeting and speaking with local residents, many have drawn my attention to areas that have become dumping grounds for all sorts of rubbish. In many cases the residents tell me that they have requested the council to clear the rubbish, but have been told that it is not their responsibility.”

Simon Thomas from Lord Street has approached the council on a number of occasions but they refuse to clear the rubbish saying that it is not on public land.

Helga Armonies in Chamber Street is in a similar situation with rubbish accumulating in the alleyway behind her house. 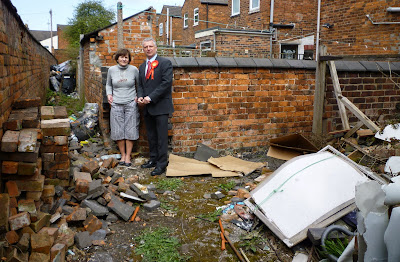 David said, “Many of these ‘grot spots’ pose a health and safety hazard and as such Cheshire East Council should be taking action rather than trying to pass the responsibility on to someone else. If Crewe had a Town Council, they could have employed a local handyman as many other Town Councils have done. Areas such as these would then have been cleared quite quickly and easily by the ‘man and his van’. As Cheshire East refused to allow Crewe to have its own Town Council, they must also accept that it is their responsibility to do those things that a Town Council would have done.”
Posted by David Williams at 07:26