Out in Crewe Town Centre Today 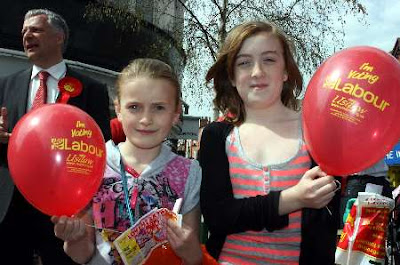 David Williams, Labour's Parliamentary Candidate for Crewe and Nantwich, was meeting with shoppers in Crewe Town Centre and with Crewe Alex supporters in Gresty Road on the penultimate Saturday before the election on 6th May.

David Williams and his team are now a common sight in Crewe Town Centre on a Saturday morning. With only two Saturdays left before the election of 6th May, David was once again meeting and chatting with shoppers last Saturday where he received a warm welcome.

David said, “I have been able to meet and chat with lots of people and have found it very useful in finding out what their concerns and hopes are. I am a firm believer in making myself available to chat with people in an informal way, and without the need to make an appointment to see me.”

He added, “A number of shoppers said they had not made their minds up yet and were keen to chat. A couple who vote for the Conservative candidate in the By-election were keen to tell me that they would be voting Labour on 6th May.”

Red balloons and ‘Vote Labour’ carrier bags proved to be very popular. Two young girls (pictured) were happy to pose with their red balloons while their mum quizzed David on what he had to offer to Crewe and Nantwich. The elderly lady (pictured) wanted something done about the uneven pavements in the town centre.

After spending the morning in the town centre, David moved on to Gresty Road where he spent some time talking with Crewe Alex supporters before watching the Alex overturn the defeat at Accrington by winning 5-1.

David commented, “The very successful morning in the town centre, was crowned by an equally successful afternoon in Gresty Road. A number of fans stopped to have a chat, and it was made special for me as I had a chance to chat with Crewe Alex (and Stoke City) Legend Johnny King. To round off the day, The Alex reversed the defeat at Accrington in what could have been a dull end-of-season match but turned out to be a very entertaining game.

Jules from Crewe Blog joined us for a short time and took a few snaps. Click here for the full story. 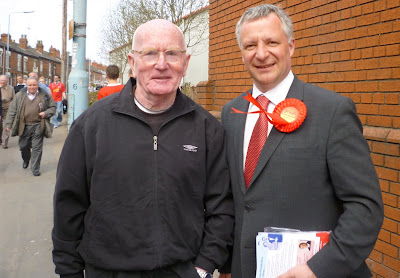