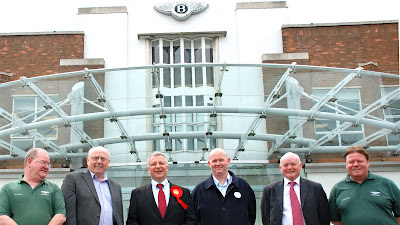 David Williams, Labour's Parliamentary Candidate for Crewe and Nantwich, who was a young apprentice at Rolls Royce and Bentley Motor Cars, went back to tour the Pyms Lane Factory last Wednesday.

David, who was joined in on his tour by members of the trade union Unite, spent some time in the various departments and chatted to the Bentley workers who were keen to show him their skills.

David said, “I spent several years here serving an apprenticeship and emerging as a skilled coach trimmer making seats, so it was extremely interesting for me to return to the factory and find that the highly-skilled crafts and meticulous attention to detail is still very much the rule at Bentley.”

He added, “Bentley Motors has a very well-deserved reputation for building the best cars in the world. After a spell of difficulty, they have emerged stronger than ever and are expanding their operations in Crewe. Much of this is due to the highly skilled work-force which is a credit to the company.”
Posted by David Williams at 13:40