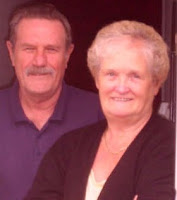 Peggy is a Cheshire East Councillor for Crewe East Division and is married to Bill. Both are Party members in Crewe East Branch.

They are backing David because he has a great personality. He is an experienced Parliamentary campaigner and knows how Central Government works.

Having worked for Gwyneth, David knows the area and the people and is committed to winning back Crewe and Nantwich for Labour.

David is easy to talk to and down to earth. He has good local connections, being a local lad and a former Rolls Royce apprentice.

David is a hard worker and I was grateful for his support in the local elections. He was knocking on doors in Crewe East right through polling day and late into the evening.

David is a man who gets things done.
Posted by David Williams at 21:59