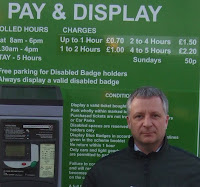 JOIN THE DEBATE ON CREWE BLOG

Following on from the Protest held on Saturday 27th February, David will lead a Protest March against Cheshire East Council’s policies on Saturday 13th March. The March will start at 11.00am from Chantry Court, near to the Hops Bar and Christ Church car park, and will proceed at a gentle pace along Forge Street, through the Town Centre and end outside the Crewe Municipal Buildings in Earle Street.

David said, “We plan what may more correctly be called a protest stroll rather than a march. The Tory-controlled Cheshire East Council has turned their backs on Crewe and Nantwich and we need to show them that will not tolerate that.”

David continued, “Following our protest on 27th February, the Leader of Cheshire East has conceded that there needs to be ‘fairness’ on the issue of Sunday parking and is proposing to scrap the charge in Crewe and Nantwich. This is a victory achieved by a small demonstration. What we want now is equality on parking charges. Crewe and Nantwich pay 70p per hour whilst Macclesfield pay 60p and in Congleton it is only 30p. A large turn-out on Saturday 13th March will show Cheshire East Council that we mean business. I would appeal to everyone to join us on Saturday 13th March to show the Council that we are not prepared to be ignored. Meet at Chantry Court at 11.00am and make your voice heard.”
Posted by David Williams at 07:06