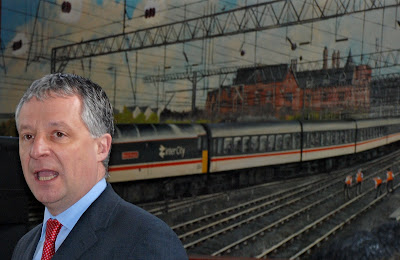 David said, “The presentation made recently to local Councillors is further evidence that Cheshire East is all words and precious little action. The plan, which now has a twenty-year time-span, put the much needed improvements to Crewe Railway Station in doubt once again.”

David Williams has consistently campaigned for a redeveloped Crewe station on its existing site and has work closely with CREAM to this end. He has twice brought the Secretary of State for Transport to Crewe. After the first visit the immediate threat of the station moving to Basford was removed and after the second visit he secured new funding for investment in the existing station.

David said, “I am increasingly frustrated by Cheshire East’s dither and delay. Instead of employing consultants to kick the project into the long grass, they should be building the link road to open up the Basford sites. Cheshire East Council is preventing Crewe and Nantwich taking full advantage of the recovery. These sites could provide 7,000 to 8,000 jobs and we should be bidding for investment and attracting new employers to the area rather than wasting money in an excuse to do nothing.”

David went on to say, “The local MP is failing to stand up for Crewe and Nantwich. He spends most of his time running down the area and making false claims on plans for a Basford super-prison. He does not want to stand up to his Tory mates in Macclesfield, who prioritised a by-pass around Alderley Edge over a job-creating link road for Crewe.”

Local Councillor and member of CREAM, Roy Cartlidge said, “I am appalled at this latest presentation. Cheshire East Council is now asking Crewe to wait another 20 years before we see any improvements. Can Crewe afford to sand by and wait another twenty years?. It seems that Cheshire East Council and the local MP do not care about Crewe at all and that only David Williams is prepared to stand up for Crewe and Nantwich as he is the only one that has made any progress on this.”
Posted by David Williams at 07:27