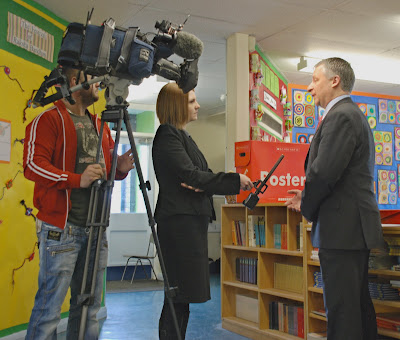 David Williams, the Labour Parliamentary Candidate for Crewe and Nantwich, recorded an interview with Granada Television during his visit to Hungerford Primary School yesterday.

David continued, “Granada is recording interviews with the candidates in these bell-weather constituencies in readiness for the General Election. Crewe and Nantwich will come under the spotlight during the election and I anticipate that more national media will be focused on Crewe and Nantwich. This will be an opportunity to promote the area.”

David added, “The Tories asked people at the by-election to lend them their vote on the basis that it wouldn’t lead to a Tory Government. Well that isn’t the case at this election. If Crewe and Nantwich votes Conservative, we will probably have a Tory Government. From the conversations I am having on the doorstep that is not what the people of Crewe and Nantwich want because they remember what the Tories did to Crewe and Nantwich in the 1980s and 1990s. The Tories have not changed. They did not back Labour’s investment in jobs because they still believe that unemployment is a ‘price worth paying’. This election is about a real choice on who will secure the recovery and help people back to work.”
Posted by David Williams at 07:11