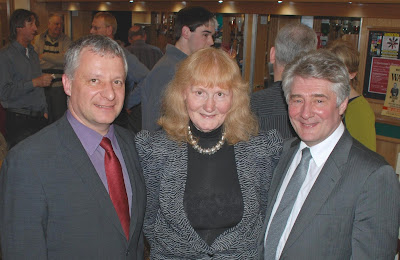 About 50 representatives of local Trades Unions went along to The Alexandra Suite in Gresty Road last Sunday to listen to and talk with Tony Lloyd MP. The forum was chaired by Dorothy Flude, Leader of the Labour Group on Cheshire East Council.

Tony said, “David Williams asked me if I would come to Crewe and Nantwich to meet with local Trades Unionists and to listen to their views at first-hand. I was delighted to do so, and the evening proved to be very successful.”

David added, “Not surprisingly the subject of taking the railways back into public ownership was high on the agenda for local Trades Unionists. It is something that I personally support and have campaigned for. It was also clear that local Trade Unionists felt they were ‘under attack’ by the Tories and that the coming elections would be all about the choice we have to make, about the kind of values we uphold and the kind of society we want to be.”
Posted by David Williams at 07:59