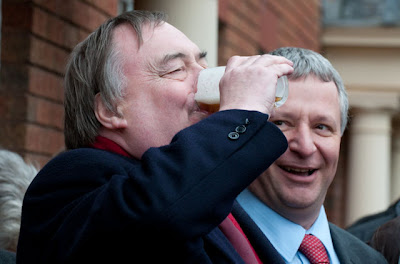 John Prescott, who is the former Deputy Leader of the Labour Party and Deputy Prime Minister, arrived in ‘The Prescott Express’ Battle Bus to the theme from Rocky blazing out from loudspeakers.

David said, “John is a very popular and inspiring figure both within and outside of the Labour Party. I was delighted to welcome him back to Crewe, a town he knows very well.”

John gave a rousing and very well received speech to the crowd that had gathered at Chantry Court to welcome him – so well received that a man at the nearby ‘Hops Bar’ came across to him with two half pints of beer saying he agreed whole-heartedly with what he had said and invited John to have a drink with him.

Photo courtesy of stefbennettphotography.com
Posted by David Williams at 19:26