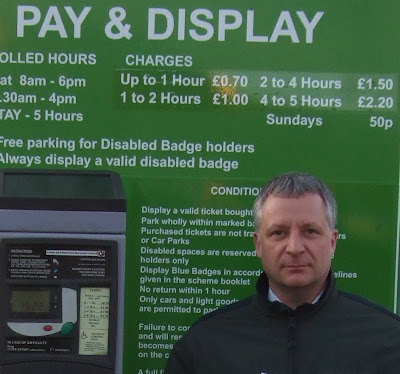 The protesters gathered on a rainy day at Christ Church Car Park and were lead by would-be MP David Williams and Clr Dorothy Flude, Labour Group Leader in Cheshire East.

David Williams said, “It's time to take a stand because this Tory controlled council are not listening to reasoned argument. I congratulate the Labour, Liberal and Independent Councilors for their efforts to reach a fair settlement for Crewe and Nantwich.

“This week’s Cheshire East Budget Meeting proved that the Tories have turned their back on Crewe and Nantwich. The area is are being undermined with parking charges higher than other nearby towns. This disgracefully unfair policy is damaging to local businesses trying to survive in these difficult times.

Dorothy Flude said, “All we are asking for is fairness for Crewe and Nantwich. Yet local Tory councilors, who claim to represent the area, failed to stand up for us. None of them joined the Labour, Liberal and Independent opposition to these terrible parking charges aimed at fleecing local motorists.

Nantwich Independent Councilor Arthur Moran said, “Parking in Crewe and Nantwich is really expensive and it will harm businesses in the two towns. We must remain a shopping destination and attract people from outside the area otherwise we will end up with two ghost towns. The situation is that serious.”

David Williams concluded, “Crewe and Nantwich Tories either abstained or voted against a proposal to reduce parking charges. They should hang their heads in shame, or better still resign and make way for people who will stand up for local motorists.

“Feelings are running high amongst local residents and we are not going to let this go. We are planning another protest in two weeks time and we will keep up the pressure until Cheshire East listens to reason.”

The next protest will take place on Saturday 13 March. Meet at 11am, at Chantry Court opposite Christ Church Car Park in central Crewe.
Posted by David Williams at 17:19