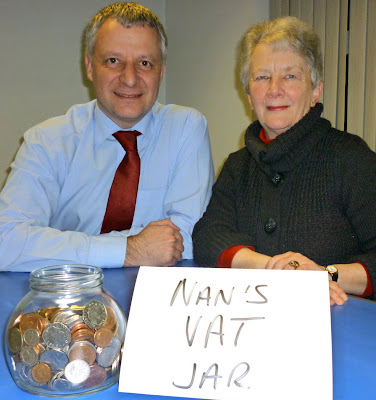 David Williams, the Labour Party’s Parliamentary Candidate for Crewe and Nantwich, congratulates local pensioner Nan Walton on making good use of the savings from the temporary reduction in VAT.

Local pensioner Nanette Walton of Brierley Street in Crewe is putting the savings she has made from last year’s VAT reduction to good use.

She told David Williams “During the time that VAT was reduced from 17.5% to 15%, every time I went to the shop I put the saving into a jar. Over the year it mounted up and I found that I have £55.56p.”

Nan continued, “I've been supporting Crewe Alex for 60 years and I’ve decided to put the money towards next year’s season ticket.”

David said, “When the Government brought in the temporary reduction in VAT they intended to put money into people’s pockets to help stimulate the economy during the global economic downturn. Although we were criticised by the Tories, Nan has demonstrated just how much this initiative was worth to people.”
Posted by David Williams at 07:27