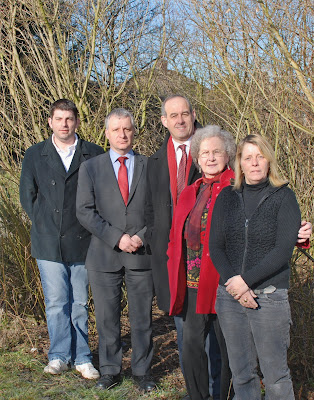 David Williams, Labour’s Parliamentary Candidate for Crewe and Nantwich, and Minister of State at the Home Office David Hanson visited ‘The Ravine’ last Saturday at the request of local residents.

David Williams and David Hanson, Home Office Minister with responsibility for Crime and Policing, accepted the invitation of local residents of The Rockwood Estate in Crewe, to visit what is locally known as ‘The Ravine’ – a long wide strip of open land running between the aluminium bungalows in Doddington Road and the houses in Capenhurst Avenue.

Local resident Kath Harvey said, “The residents in this area have banded together over the past few years to transform our estate from what was once a poor rated area into one where there is a great deal of local pride and community spirit. We have worked well with the two local PCSOs and the results have been fantastic. The one area that is still an eyesore and a source of petty crime is ‘The Ravine’. People from outside the area gather there to consume alcohol and use drugs. There is a litter problem and because it is so overgrown with bushes and trees it is a very difficult problem to tackle.”

Kath added, “We have worked closely with the local community police officers and they have been a great help, but, despite requests to Cheshire East Council to clear out the overgrown bushes and trees we do not seem to be getting anywhere. That is why I spoke to David Williams to see if he could help.”

David Williams said, “When Kath spoke to me I went down to see The Ravine for myself and it is very densely planted with trees and shrubs that have not received any maintenance since they were planted. I can well see how this is a problem area. The local PCSOs have been very helpful in doing all they can but more pressure is now need to be put on Cheshire East Council to clear out the dense bushes and make the area one that not only can be used as a play area by the children, but can be properly police by the PCSOs. I invited David Hanson to have a look at the area and speak with local residents, and to hear about the good partnership that has been built up between the residents and the Community Police Officers.”

David Hanson commented, “It is good to hear about how successful the partnership between the local residents and the PCSOs has been in this area. It is a message than I am hearing all over the country. ‘The Ravine’ would be an ideal spot for children to play, away from the roads, or for the residents to hold community events to build on the community spirit that has already been established, but in its present state it is a haven for petty crime and anti-social behaviour. The local council need to drastically clear out the overgrown bushes and trees and transform it from an eyesore to something that is useful in the community.”