DAVID WILLIAMS GETS ON HIS BIKE FOR SPORTS RELIEF 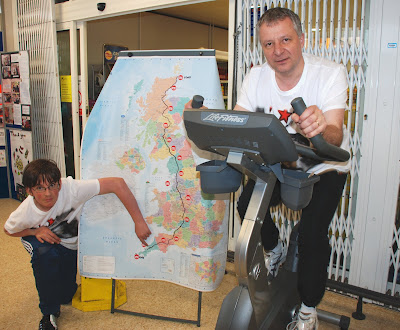 David Williams, Labour's Parliamentary Candidate for Crewe and Nantwich, got on his bike in an 'end-to-end' challenge at Nantwich Sainsbury's in aid of Sports Relief last Saturday.

Nantwich Sainsbury's organised the bike ride in aid of ‘Sports Relief’ and installed an exercise bicycle in the entrance to their store. A team of riders took it in turns on the bike and the distance they covered was closely monitored.

David said, “I was more than happy to accept Sainsbury’s invitation to take part in this ride. Sports Relief is a cause close to my heart and one that I am pleased to support. As a keen walker and cyclist I was able to bring the total distance completed up to the 900 miles mark and the exercise has done me good as well.”

David’s son, Tom, joined his Dad in supporting Sports Relief as he took over from him on the next stint of the journey.

David added, “Theoretically I spent the morning cycling in Cornwall towards the end of the journey from one end of the country to the other. Sainsburys Staff and their friends have done a great job in raising funds and many of the shoppers at Sainsburys did their bit by dropping donations into the collecting buckets as they left the store."